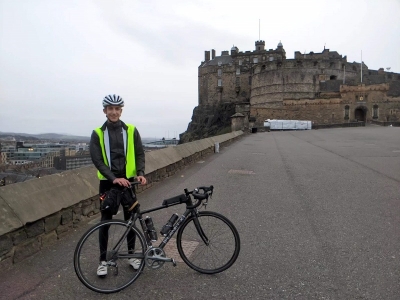 1. What made you first try Orienteering?

Having first started orienteering in Year 7, I think that I used orienteering as an opportunity in order to meet new friends. I also enjoy trying new things and challenging myself both physically and mentally while running in nature.

2. Which aspects of Orienteering did you enjoy?

I enjoyed the problem solving aspect of orienteering which I enjoyed alongside the physical challenge of the competition whilst at the same time being out in nature.

I first became interested in cycling through going out on my own on a weekly basis and seeing how far I could push myself. I then spoke to my neighbour who is a member of the Macclesfield Wheelers who suggested that I try out some of the Macclesfield Wheelers rides and once I was riding with a group every week this is when I started taking my cycling much more seriously.

4. Describe some of the training that you do.

The training which I do is very dependent on the time of year. In the winter for example, I will generally be doing longer winter base miles in order to build up my base fitness complimented with some gym work or running to mix it up a bit. As I approach the racing season, I increase the intensity and reduce the volume in order to build my top end fitness. This is usually through intervals which I continue throughout the season along with some longer fast rides. Usually training about 9 hours a week on average.

5. What cycling competitions have you taken part in, and how did you get on?

6. Why did you set out to do this remarkable solo challenge recently, how did you prepare for it, how was it on the day?

I set out on my cycle to Edinburgh from Macclesfield in order to do something in memory of my Grandad and to raise money for the MS society and the great work which they do in research and support in order to work towards the vision of a world free of the effects of MS and stop MS. To prepare for the challenge, I increased the number of hours I was training every week leading up to the event and I was simulating the kind of effort I was going to be doing. I did this by going out on much longer solo rides up to 170miles. On the day of my challenge, it was incredibly tough overall, however there were times in particular when the going was much harder than other times. For example within an hour of setting off, the heavens had opened and I was soaked through, however once that I had dried off my morale improved greatly. One of the most challenging aspects of the challenge for me was making my way through the Lake District in the early morning and going over some of the mountain passes which were incredibly tough going, however the views were stunning. On the flip side, one of the highlights of the trip for me would have to be the final run in to Edinburgh where the wind was helping me along, that is when it set in that I had just ridden my bike from Macclesfield to Edinburgh and I was able to reflect on my ride and how the money I raised would improve the lives of people suffering with MS

7. What are your goals for the future?

My immediate goals for the future are to be successful in my application for Medicine at University. However, further in the future I would like to continue competing at both cycling and orienteering as well as trying out new sports at university as well as being part of the Orienteering society at University and hopefully getting more people into the sport. I also have an aspiration in life to cycle around the earth in less than 4 months!

8. What would you say to encourage a young person to take on a challenge?

My advice to anyone young person, who is wanting to take on a challenge, would be to firstly plan meticulously what you are going to do and have a back up plan! Then you must prepare yourself for your challenge. Following this, you should be ready and feel confident about the challenge that you are taking on. Finally, enjoy whatever your challenge may be and don't forget to smile!

See other entries Categorised under: Juniors