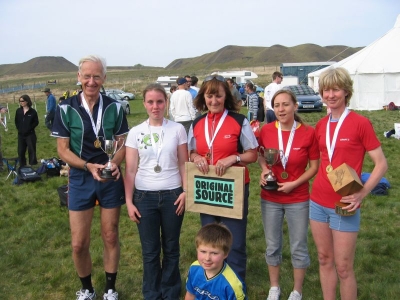 Our juniors very narrowly missed qualifying for the final last weekend at the Borderliners event at Faulds Brow near Caldbeck. A team of 12 took part and we were represented in nearly all classes. The ground was open and runnable, leading to some fast times by all runners, the weather was also ideal, not too hot or cold and dry.

WCOC had a team of 25 and won the round, LOC came second with 17 runners and 873 points, we, with our smaller team were a creditable 3rd with 870 points.

Well done to all who ran and thanks to the parents who acted as transport.

Full results can be found on the BL website.

Several MDOC members came away from the 2 day event in the Yorkshire Dales with top 3 placings in the Dales Trophy which was the decided on the combined time from both days;

Day 1 also decided who became the Northern Champions, open to members of Northern clubs only. This year we have 2 champions, Rae Lomas W65 and Tom McCann M10.

Full results can be found on the AIRE website.

We again entered two teams in the Peter Palmer Relays which were held at Yardley Army camp near Northampton early on Sunday morning. The first 2 legs of this 6 leg relay were held in the dark/early morning light. Sunday morning was quite clear and starry when the early runners Liz and I got up at 4 am, but by the start of the race mist had descended and added to the atmosphere. The mass start involved a charge across a field into the forest, followed by 20 minutes waiting for the runners to pass the spectator control. Tom Fellbaum emerged from the mist in joint first at the spectator control.

All our runners managed to complete their legs without the dreaded disqualification that seems to be very common at this event (14 teams suffered this fate).

In the main Peter Palmer event we finished 7th and 19th out of 20 finishers (behind these were 14 DSQ). In the Joan George handicap event (for teams with a combined orienteering age of less than 90) we finished a strong 3rd out of 17. Full results can be found on the BAOC website.

Both our teams had runners of various ages and levels of experience and ALL deserve congratulations on their performances.

Congratulations to Tom Fellbaum (M15) and Alice Fellbaum (W14) who have been selected for the Start Squad for 2008.

Congratulations to Sophie Wood who has been selected to join the GB team for the MTBO World Championships, which are being held in Nove Mesto in the Czech Republic from the 6-11th August.

Sophie was the winner of the Veteran Womens title in the Long Distance race at this year's British MTBO Championships, which took place on Beaudesert and Rawnsley Hills at the end of June.

The team will compete in 5 races - a Sprint, Middle, Long Qualifier, Long Final and Relay - over the 6 days. You can follow the action at the event website.

Many thanks to everyone who ran in the Footpath Relay, and to all those who helped transport wet and muddy runners. Special thanks to Malcolm Fowler and Andrew Tongue who volunteered to run two legs. Everyone turned up, and as far as I know no-one was left waiting hours in the rain for a lift.

A brilliant team effort - and very impressive results considering the number of juniors, seniors and female runners in our team. Teams only need to have 20 handicap points, and our two teams had 36 and 43 points respectively.

The full results are given on www.dvo.org.uk, but I have summarised the overall results and our individual results here. Note that legs 6 and 20 had an intermediate control, and are treated as two legs in the DVO results. I have added the times together. 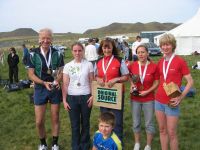 There was more success for Liz Britton in the Relays - as a member of the SHUOC team who took 2nd place in the Women's Premier. Well done, Liz!

More photos from BOC2007, taken by Tony Davies and Trevor Roberts, can be found in the Gallery

MDOC has been awarded Clubmark accreditation and were presented with a Certificate to that effect at the JK prizegiving.

Thanks go to Rae Lomas, Jenny Shaw, Margaret Gregory and John Britton for all their hard work in achieving this.

In memory of Phil Creasey
Posted on April 6th, 2007

May I thank all of Phil's friends for their very generous donations to the Woodland Trust. As a result of the money given, an acre of woodland has been dedicated to Phil's memory at Waulkmill Wood in Bollington and a plaque has been erected with a short dedication inside the woodland. If anyone would like to visit the wood, they can contact me for directions or a grid reference.

On May 11th at 8pm at Bollington Arts Centre, Phil's brother Malc will give a short tribute to Phil and then give an illustrated talk entitled "Travels without a Yak". If anyone would like tickets they are available from me on 01625 573945. (Note: the phone number on the poster is wrong.)

On a personal note, thank you to everyone who has sent messages and especially photos of Phil. They are much appreciated.