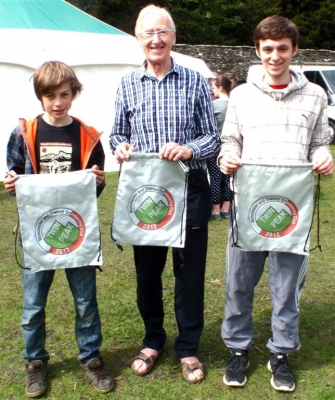 MDOC juniors Matthew Fellbaum and Alistair Thornton have both been selected as non-travelling reserves for the England team for the ISSF World Schools Championships to be held in Monte Gordo, Portugal in April 2013.

Congratulations to both of them.

Matthew and Laura in successful England team at WJHI 2012
Posted on October 17th, 2012

The event was held in Surrey with the Individual event at Headley Heath on Saturday, and the Relays at Wisley Common on Sunday.

Congratulations to Thomas Fellbaum (M20) who is one of 27 athletes selected for the 2012-2013 Elite Development Squad. The squad is focused on preparing athletes to win medals at WOC in two to five years.

Congratulations to two former members of MDOC, Killian Lomas and Steve Birkinshaw, for their recent wins.

Killian Lomas was part of the British Team for the World Masters Mountain Bike Orienteering Championships in Hungary at the end of August, taking Gold for the Sprint and also making the podium for both the Long and Middle races. Full report on www.bmbo.org.uk/news

And last week, Steve Birkinshaw won The Dragons Back - five days of mountain running and navigation through Wales, from Conwy Castle in the north to Carreg Cennen Castle in the south. Full report and videos on www.dragonsbackrace.com

Congratulations to Thomas Fellbaum (M20) who has been selected to attend the Euromeeting followed by the Elite Development Coaching Camp which is being held in Obernberg-am-Brenner, Austria from 8th to 19th August.

And also to Matthew Fellbaum (M14) and Laura Hindle (W14) who have been selected for the Regional Squads summer coaching camp at Lagganlia, Scotland in July.

Well done all of you. 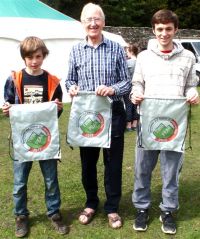 After excellent runs in the Middle Distance event on Sunday, Tom and Andrew also became the overall Twin Peak prize-winners in their respective classes, as did Alistair Thornton in M16A.
(Click photo to enlarge)

Full results are available on the Twin Peak 2012 page.

Alistair Thornton (M16) has been selected to attend British Orienteering's Talent Development Coaching Camp this summer. The Camp is being held at Badaguish Outdoor Centre, Aviemore from 21st to 28th July 2012.

MDOC members Matthew Fellbaum (M14) and John Britton (M60) were part of the successful England team which won the Interland Cup 2012 competition in southern Belgium last weekend. There is a Team photo on the Orienteering England website http://www.orienteeringengland.org.uk/

Tom Fellbaum (M20) has been selected to represent Great Britain at the Junior World Orienteering Championships, which are being held in Korsice, Slovakia from 7th-14th July 2012.

Congratulations to members who won prizes and medals at JK 2012 in Scotland over Easter:

MDOC members came away with an impressive medal tally at the 2012 British Sprint and Middle Distance Championships which took place at York University and Strensall Common on 24th/25th March.

Other medal winners in the Sprint Championships were:

and in the Middle Distance Championships:

John has also accepted the role of GB Team Manager for both Championships.

Matthew, John and Vicky selected to run for England at Interland 2012
Posted on March 8th, 2012

Congratulations to Matthew Fellbaum, John Britton and Vicky Thornton who have all been selected for the England Team for Interland 2012, which takes place over the weekend of April 21/22.

The 2012 Interland Cup match will be held at Habay-la-Neuve, in southern Belgium with the pre-event at Citadelle de Montmédy across the border in France.

The Provisional Results for the North West Night League 2011/12 after the final round have now been published - click here to view.

I have had to assume that all the people on the Bigland event completed their courses without retiring. We will never know if anyone miss punched.
However, if anyone has declared that they retired or were non competitive then please let me know ASAP.

And finally if you spot any mistakes then let me know.
The raffle will be done in the next few days

MDOC now has a presence on both Facebook and Twitter - thanks to Steve Nicholls and Tom Fellbaum. You can now access them via links in the page banner:

Dan Riley and other club members attending the Hazel Grove Club Night two weeks ago were filmed for an article on orienteering which was broadcast on Sky Sports News yesterday as part of their 'Get Involved' programme.

Read more about it and watch the video on the Sky Sports News website.