Congratulations to River Edis-Smith (M20) and Dom Wathey (M14) who were 1st and 2nd in the Junior Elite at last weekend's British Trail-O Championships in Scarborough, and to John Kewley (JK) who was 3rd in the Senior Elite.

Dom had the best Time Control score (by some margin) across the whole of the Elite field, and had it not been for one control being voided he would have beaten River. 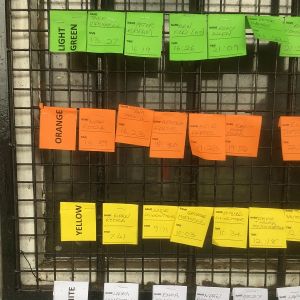 Courses were planned by Ben and Alain Kyd, and several club members were on hand to provide advice to newcomers (of which there were many) as well as do all the normal jobs, and on this occasion hanging results on a washing line, turning back the clock almost 20 years!

Congratulations to Ben Kyd (M16) who has been invited to join the North West Junior Squad following the recent 'NWJS newbie day'. He joins fellow MDOC junior, Dom Wathey (M14), who has been a member of the Squad since last year.

You can read more about the NWJS on the NWOA website ...

This year's North-West Sprint Orienteering Championships took place last Sunday, 16th June, as part of SELOC's Horwich Festival of Racing. It was a 2 part sprint with the times for each part added together for the final result.

Can you help our athletes fulfil their full potential in 2020?